Following a visit to Tonsley Innovation District, RDA AHFKI identified an opportunity to trial an autonomous (driverless) vehicle in its region. A use case was developed for residents in a retirement village setting where increased social activity and outings would be a positive outcome.

One of Aurrigo’s three Adelaide based podzero vehicles which have been operating since late 2017 at the Tonsley Innovation District as part of the South Australian government’s Future Mobility Lab Fund program, was assigned to a trial at the Lendlease owned Elliot Gardens retirement village at Port Elliot. The project was supported by the Department of Planning, Transport & Infrastructure (DPTI) and Alexandrina Council.

The trial included an independent research program conducted by the Global Centre for Modern Ageing (GCMA), co-launched by the Federal and South Australian Governments to place the state at the forefront of modern ageing. The role of their research was to uncover residents attitudes and perceptions towards autonomous vehicles, investigate uses in a retirement village setting, understand user experiences and explore ideas for future autonomous vehicles.

The battery powered podzero operates autonomously through multiple sensor technologies with speeds up to 24 kmph and has capacity for four passengers or small cargo transport. The pod was named “Elliot” by popular vote of the Elliot Gardens 330 residents

The trial was a huge success, exposing our communities to new technology, confirming attitudes to autonomous vehicles were largely positive, and providing stakeholders with valuable real-world experience that can inform forward development of technology and its implementation.

The GCMA trial summary report below, outlines the results of the trial including recommendations for future trials and vehicle design and service considerations.

Congratulations to Aurrigo and all project partners on the nomination of this trial for an Intelligent Transport Systems Australia National Award! 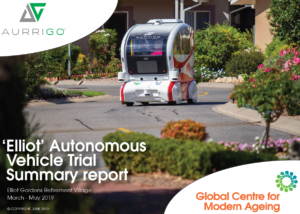 Mobility For All – A Special Report on Autonomous Vehicle and Accessibility 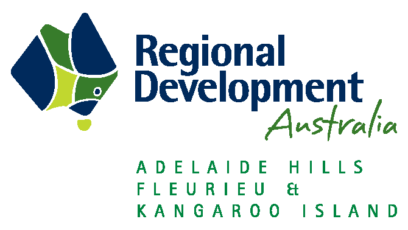